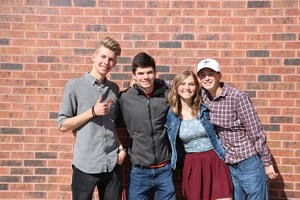 Durango High School Students went to the polls this March to elect new student body leadership from the class of 2019. For their co-student body presidents, the students have elected Alex Hise and Emma Hackett. William Lammons and Ian Mattox were elected as vice president and secretary/treasurer, respectively.
When these leaders describe why they ran, a theme of community and school unity comes across as a thread that ties this team together.
Hise started in student council his freshman year at DHS initially because he was interested in the social aspect of the group, but developed a greater appreciation for the work of student leadership.
“It grew into more of a passion that I have now. Being involved in the school and making great new friends everywhere I turn,” he said.
Hackett is proud of the work the group has been involved in over the past three years and looking forward to building upon previous student council successes.
“I think the biggest accomplishment our student council has done is DHS Rocks. The first year that we did it we raised around $4,000 for a girl in our community that really needed the money for treatments for a health condition. It was just really cool to see the whole entire school come together to help one person in our community that needed our help and support,” she said.
Lammons grew up watching movies with high school elections, and knew that was something he wanted to participate in some day.
“I always wanted to be a student body officer. I wanted to make sure that student council was more of a family. I feel like if student council operates more as a family rather than a collection of individuals we can be more productive and we can help the school better,” said Lammons.
Mattox ran in the election with ambitions to making lasting improvements in the school community.
“I really wanted to make a lasting change and leave a positive impact on DHS that I could look back on and say that I was a part of that,” he said.
We look forwarded to seeing Mattox’s goal play out. As seniors next year, these students are sure to lead the school in a positive direction creating a sense of unity among students and leaving a positive legacy in the school community.