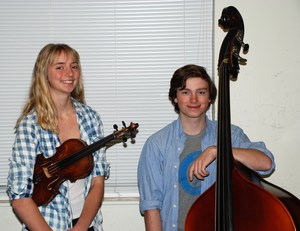 Four area youth have been selected for the 2018 Colorado All State Philharmonic Orchestra, sanctioned by the Colorado High School Activities Association. Rebecca Bowers, violin, and Ben DeBelina, double bass, from Durango High School are joined by Jack Ferguson and Reed Merchant, both double bass players from Bayfield High, in sharing this prestigious honor. Bowers, DeBelina, and Ferguson are also members of the San Juan Symphony Youth Orchestra, while Ferguson contributes his skills to the BHS Concert and Jazz ensembles as well. Merchant is part of the concert band (baritone), choir, and orchestra programs.
According to Rusty-Alex Charpentier, DHS Orchestra Director and SJSO member, the All State Orchestra process starts at the beginning of the school year when students receive the scales and excerpts they need to prepare to audition. Students must be self-motivated to practice because the audition pieces are not part of class rehearsals. Students record and submit their audition, consisting of 5-10 minutes of very challenging music including major, minor and chromatic scales - each of three octaves - two excerpts from the orchestral repertoire and a solo piece of their choice.
"Having students make it into the Colorado All State Orchestra is a great honor for our orchestra programs and our entire Four Corners community. It's a joy to get to work with such talented students on a regular basis in my classroom," said Charpentier. "Ben DeBelina has a great appreciation for all types of music and frequently clues me in to cool music that I haven't even heard of! I think that his strengths as a musician come from his thoughtful listening skills and inquisitive attitude."
Of his violinist, Charpentier said, "Rebecca Bowers is an absolute powerhouse on the violin! Her tone and facility have a huge impact on audiences. It's wonderful to see such extraordinary talent paired with a humble and positive attitude."
Lech Usinowicz, BHS Orchestra Director, SJSYO Director and Be FRANK Foundation Executive Director, described Reed Merchant as a “dynamic musician” who “is developing into a triple musical talent with his participation in choir, band (baritone) and orchestra.” BHS choir and instrumental music director Derek Smith added, "Reed Merchant is quite simply one of the most dedicated and hard working musicians I've ever had in this program.  Every day, he takes home that monster bass to practice, along with a Baritone from Band. He sings constantly. This rehearsal happens after football practice and then heavy lifting at the gym, all while maintaining a high GPA.”
Usinowicz added, “Jack Ferguson started playing bass in 3rd grade with the first Be Frank Beginning Orchestra in Bayfield. He has been able to mature in his knowledge and understanding of the bass by participating in Jazz studies at BHS and the San Juan Youth Symphony. Jack sits second chair in the SJSYO behind a FLC senior bass player.” Smith said, “ever since [Jack] walked into our Band and Jazz Band, his musicianship was among the best I've ever seen in a student.”
Commenting on being the first orchestra students in Bayfield (multiple band and choir students have been selected) to achieve this honor, Merchant said, “We were just the first to decide to go for it.” Ferguson added, “there will be many more to come!”
Print