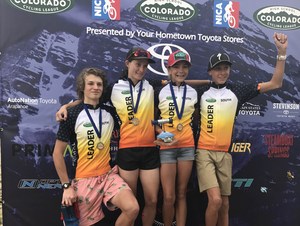 The Durango High School Mountain Bike Team is blazing down the single track as they ride into the end of the season. The team recently won the race team title and the Division 2 South Conference Championship in Nathrop, Colorado this past Saturday, October 7th. DHS finished the season with 10,384 points, almost 200 points ahead of the 2nd place team.

Many of the DHS riders have been sporting leader jerseys this year as they have continued to lead the pack at races around the state. After the first two races, DHS had four racers in leader jerseys: Maddie Jo Robbins (Varsity), Cobe Freeburn (JV), Ruth Holcomb (JV) and Wiley Corra (Freshman).

Heading into the South Conference Championships the DHS team was in 1st place in Division 2 for overall series points.

DHS featured prominently on the podium at the Conference Championships:

In all, the team had 12 of their 14 team members qualify to race at State. They head to the State Championship in Eagle, Colorado on October 21st-22nd.