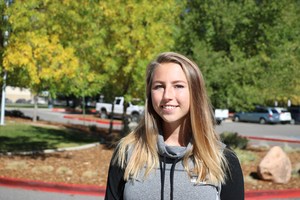 DHS sophomore Jordan Taylor is making waves on the Colorado Wake Association circuit. After just three years of wake surfing and only one season of competing in the sport, she became the Colorado State Wake Surfing Champion on September 2, 2017.
She first tried wake surfing while visiting family in Tennessee, and then gained experience with her family when they began wake surfing on Navajo Lake. They keep a boat on the southern end of the lake, and she’s able to train there about 3-4 days a week during the summers.
Jordan wake surfs for the joy of the sport, rather than the competition.
“It’s just fun. I don’t really see it as competitive. When I go to competitions I just get out there and surf. It’s just really fun, and the people are fun. That’s the best part,” she said.
Wake surfing scores are based on tricks and style. Jordan says biggest challenge she’s faced has been learning new wake surfing maneuvers, but she still has a lot of tricks up her sleeve.
“I’ve got a 360 in my hands, I’ve got some airs, and board slides where you just go up the wave and slide your board. I’m working on a 180 shove which is where you catch air and you flick the board around and land on it again. That one is difficult. It’s a challenge,” she said.
The wake surfing season may be over, but Jordan won’t be slowing down. She is also a Nordic skier and looking forward to participating on the new DHS Nordic team this winter and playing golf for DHS in the spring.