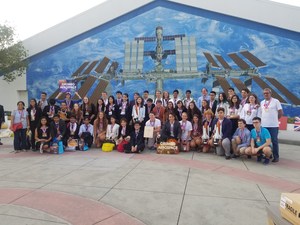 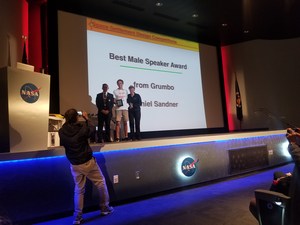 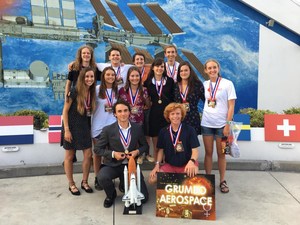 Les Brown, a leading American motivational speaker claims that one should “Shoot for the moon. Even if you miss, you'll land among the stars.” The Durango Aerospace Design Team; however, shot farther than the moon in their trip to the World Finals of the International Space Settlement Design Competition at Kennedy Space Center in Florida.

The Durango youths were an integral part of Grumbo Aerospace’s championship effort and swept all the individual awards during competition Saturday through Monday. Grumbo Aerospace, a theoretical aerospace and engineering corporation, was composed of sixty students from schools in Romania, India, Seattle, Beijing, China and Iowa/Texas.

Three individual honors are awarded, and all went to Durango students:

The thirteen sleepy Durango youths returned Tuesday morning from the forty two hour space settlement design competition that simulates project proposals given within the aerospace industry. The 2017 project proposal detailed the need for a functioning space settlement upon the surface of Venus. The inhospitable environment of Venus was only one of many challenges the Durango had to overcome to succeed within the competition. Other challenges included sleep deprivation, language and cultural differences and shortage of time to complete the proposal.

The students first received technical briefings Saturday from industry experts with experience in automation engineering, human factors, structural engineering, operations and infrastructure, and management. Then they got the request for proposal setting their mission: to design a settlement on the Venus that specializes in exploration, prospecting and surveying of Venusian materials, operations and maintenance of a city that provides for 10,000 residents, and beginning the process of terraforming Venus.

Rising senior Paxton Scott was elected as president of the combined team known as “Grumbo Aerospace”. The team also elected rising senior Abby Scott as a co Systems Engineer, her counterpart Lakshyajit Dwivedee being from the Shri Ram School in India. Other managerial position held by Durango students: rising junior Katelynn Weese as head of Human Factors and Safety and graduating senior Harry Steinberg as the head of Structure and Engineering.