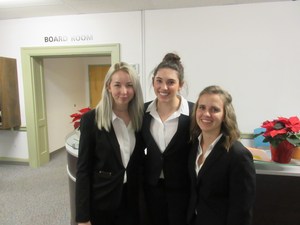 Twenty-one of our Durango High School DECA members depart for the Broadmoor Resort in Colorado Springs February 25th-March 1st to compete in the Colorado DECA State Leadership Conference. They will be among more than 3000 Colorado DECA members striving to be the best in more than 40 events.

DECA is Durango High School's student organization for emerging leaders in marketing, management, hospitality, finance and entrepreneurship. The top 6% in each event earn the right to advance to DECA's 2017 International Career Development Conference to be held in April in Anaheim, CA.
Among DHS DECA's State attendees will be Anna Joslin and Ruby Epstein, who, along with Jenna Engelken, presented their Kill-A-Watt plan to the Durango 9-R Board of Education in December 2016. Kill-A-Watt's plan is to upgrade Durango High School's interior and exterior lighting by installing new parking lot and interior LED's, saving the district nearly $6000 in annual energy costs. Kill-A-Watt also calls for DHS to begin a new sustainability club for students to take an active role in looking at ways to improve sustainability within the school.

Kill-A-Watt has collaborated with 9-R staff and local business to analyze current practices and suggest adopting new ones. For instance, their parking lot plan will significantly improve the brightness of the lot in the evening, providing more safety for students, staff and patrons leaving late at night following practices, performances and games. The increased brightness via industrial LED lighting will pay for itself in less than three years through reduced electrical use and La Plata Electric Association (LPEA) commercial rebates provided for the upgrade.

Kill-a-Watt will compete in DECA's Community Service Project event, which encourages DECA members to use marketing techniques to benefit their local community. Kill-A-Watt's written submission of their activities totaled 30 pages of research, purpose, rationale, an implementation plan along with a detailed understanding of how their plan would impact the Durango Community.

"I never knew their was so much behind the delivery of electricity, and that we take so much for granted," commented DHS senior Engelken. "Small but mindful changes can make a big impact over time, resulting in huge savings for a large organization while simultaneously reducing our carbon footprint", Engleken added. Engleken, who also serves as a 2nd year DHS DECA chapter officer, wanted to find a way to combine her experience as LPEA's National Rural Electric Youth Tour with her DECA experience to bring about community change. Joslin and Epstein will actually present the plan at DECA state while Engelken attends an additional energy conference occurring on the same days as the DECA State conference. "I'm sorry to miss the state DECA conference but I have high confidence in Ruby and Anna. If they do well I hope to rejoin their presentation at DECA ICDC in April."