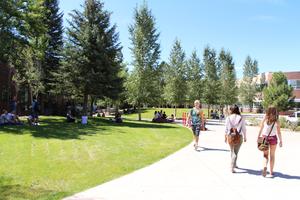 Girls from Durango High School have discovered their hidden talent for cybersecurity this year with an exciting Governor backed program, Girls Go CyberStart, designed to bridge the cybersecurity skills gap in the US. During the program, girls across the country competed in a series of digital games and challenges to see if they have what it takes to make it in the cybersecurity industry.

Over ten thousand girls across 27 states took part in the first stage of the program, CyberStart Assess. At the end of that round, 6,600 girls performed so highly that they received invitations to take part in the second round, CyberStart Game.


Running until June 28, CyberStart Game pits teams against a series of increasingly difficult cybersecurity challenges to win points for their school.


For the first month of CyberStart Game, girls applied their cyber skills to accumulate points, vying to be one of the schools invited to the third and final stage. Last month, Durango High School girls found out their score qualified them for The National Championship for Girls Go CyberStart 2019. Here 120 school teams, each comprised of 4 girls, competed in a national online ‘Capture the Flag’ competition, which ran June 5 – June 7.


The top-scoring teams in this final round, both nationally and per state, competed for cash prizes for students and their schools. An additional ten high school juniors and /or seniors from Colorado with high scoring CyberStart Game scores will also be awarded $500 each in college scholarships.


“Congratulations to all the schools through to the National Championship round of Girls Go CyberStart! It’s fantastic to be able to celebrate and bring to light the hidden-talents of high school girls across the US.


“Alongside Governors, the support from schools and teachers has been instrumental in helping us empower a generation of incredible young women to become the next leaders in an industry where they can make a huge difference. We can’t wait to see what this talented groups of students from Durango High School will go on to achieve.”


Tara Haller, Mathematics & Computer Science teacher at Durango High School, said “We’re so proud of the 24 girls who have worked so hard to get through to this stage.  Durango High School is ranked number one in the state of Colorado for their participation in the “Assess” round. Four team members, Lorien Hoshall, PJ Rude, Jessica Fiala, and Deen Grey will represent Durango High School in the National Championship Round, June 5 -7.  We always knew Durango High School had the potential to shine and these girls are proving that to the whole country!”

Congratulations to our team for competing on the national stage!!